Why is it called the Red Book?

The first book was launched in the late 1990’s under the brand The Golfer’s Passport in Eastern Ontario by the National Golf Course Owners Association (NGCOA) Canada but quickly pivoted to a more direct marketing approach and became referred to as The Golfer’s Discount Book.

The name worked well. The awareness, popularity, book sales, and effectiveness as a promotional tool for golf courses; increased dramatically. In the early years, the book was produced annually in a different colour, while keeping the same logo and consistent layout. However, it was noticed that when the books featured red covers; they seemed to garner more attention and as a result more sales. Therefore, by the early 2000s, the NGCOA Canada began repeating the red covers each year with no long-term colour commitment in mind.

Fast-forward a few years and we noticed the slang reference of ‘red book’ being used by many golfers and retailers stocking the books due to the loud red cover being such a distinguishing visual feature. Since the term ‘red book’ was also used in some financial circles to report on the book value of certain products and services, plus pro tour golfers scoring below par are usually posted in red rather than black for above par, the NGCOA Canada decided to make the name official in 2003 and changed the name to the Golfer’s Red Book.

AND as they say; the rest is history. 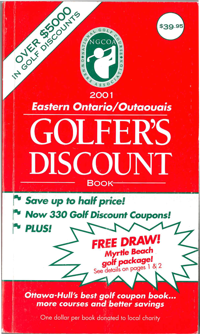 The National Golf Course Owners Association (NGCOA) Canada is a not-for-profit trade association, owned and governed by its membership made up of Canadian golf facilities from coast-to-coast. The Association owns and manages consumer GOLFEXPOs across the country, prints and distributes the Golfer’s Red Book in British Columbia and Eastern Ontario/Outaouais, is a partner in the Golf Fore All Book in Central Ontario, and runs the Get Golf Ready adult player development program and the Take A Kid To The Course program.